xc-marathon was in 2019 invited by klubi tartu maraton to visit tartu and estonia and to take part in the 46th. edition of the tartu maraton for cross country skiing. here´s what we learned about the country, the city and the race:

But first, to be sure to arrive as planned in a distant destination, it´s always good to go through preparations. Here are some nice-to-know thoughts to start with:

My ´day 1´ of this trip started several weeks before the race: my passport and it´s validity regarding expiration rules (countries ask for various time periods before your passport expires to allow you to enter), and visa regulations was checked early.

In addition, for this race the organizers of the Tartu Maraton are sending out a ´remember to read this´-list to the participants. A lot of information, from advising to bring rain boots for the finishing area to how the logistics work and, of course, to bring new and dry clothes for after the race. Very good to have for a tense traveller that meticulously have been watching changing weather reports, fixing travel plans (bus, plane, plane, bus, …) hotel, planning which skis to bring, which wax ond so on.

traveling to tallinn and tartu

My flight was destined to Tallinn airport, and since Tartu is a considerable distance from Tallinn, I had to choose how to complete my journey from the airport. Estonian primary means of communication both orally and on road signs is their own native language (but they speak english fluently when addressed in english), so traveling on your own (by rented car, for example) could mean more complications than if traveling with bus, as I did. However, the bus journey was as smooth as it could be as the bus was modern and on time, and the roads flat, straight and of good standard.

A skiing festival in an academic city

The skiing maraton is actually part of a bigger skiing festival – or as it is named – the Estonian Song  Festival of Winter, also with a fun skiing event for the children close to the city centre. This way, the weekend was colored by the skiing festival, and the kids´ race is worth a visit. To get there you can walk (if living near the city center of course), and then also get to look around a little in the very nice city.

Tartu is historically an academic city, and visually and architectonically bears such an impression also. The statues, buildings and people give a strong impression of a city with a cultural and academic atmosphere. It also have a calm and quiet atmosphere, and besides the above mentioned features, it also carries general visual impressions from both soviet and german influence.

Back to the childrens race; it was impressively organized, and with a lot of participants. The race had (of course) a short, but a very nice track. The parents could walk alongside their hopeful ones all the way, and good looking medals were given out to everyone. This event seemed to be engaging to both children, young and the adults.

And by the way, although the estonian kitchen might not be renowned for their excellence (most national food traditions are not), you can expect to find all kinds of qualities and dishes for you own preference.

The city of Tartu also hosts a new, modern museum, The Estonian National Museum. As part of the press we were invited to the museum for a visit, and can only recommend all skiers that go to the marathon to also pay the museum a visit. It presents the country´s story in a great way, and also have a super restaurant where you can enjoy a tasty lunch or dinner. Some times they also have various events there, as shows, concerts or plays. Our guide was very knowledgeable, and the museum had an astonishing architecture. It is situated on an old take-off strip for planes, so the physical shape of the museum resembles the take -off trajectory of a plane (see image). Different themes in the museum also reminded me as a norwegian about our present past and the changes we have gone through.

The skiing marathon itself was also a very good experience. The logistics worked fluently, in my experience there were no problems and everything happened more or less on time. This is of course important since the stadium with the starting field was a (quick) drive outside the city centre. At the stadium there were enough space for last minute waxing (I arrived quite early), leaving the bag (with extra clothes for after the finish) with the transport was easy and also the execution of the start with various groups of skiers worked fine.

I also noticed the calm, stressless atmosphere at the stadium, the Tehvandi Sports Center in Otepää, and already before the start line the tracks and the ground was in perfect condition.

This was, for this year, I must say unfortunately also the case with the very icy tracks. The organizers can of course not do anything with the weather and thus the skiing conditions, and the had probably done all they could. Still, even if the Tartu maraton is quite flat, the tracks were so hard that the initial small uphills created queues, and downhill there was a lot of people hesitating, which again created sudden needs to stop for everyone behind and unavoidably there was a lot of falling, falling, falling. It became a little funny, to be honest, but luckily this happened in a flat race and there was not many accidents that came out if this as I could see. On the other side, these conditions created vary fast and hard tracks. A note to myself for a later participation in conditions like this would be to remember much harder klister wax! I think I skied around 60 km´s almost without any grip wax… This was only my own fault, but a little sad because the profile of the tracks really invites the amateur skier to still employ his/her skills for classic cross country skiing for a whole 63 km.

Many amateur skiers like to (at least I do) enjoy the topography / scenery throughout their race participation. The Tartu maraton landscape invites you to enjoy soft, smooth landscape shapes, sometimes deep forest atmosphere and other times more open landscapes. The plainness of the track profile allows you to really float along the course.

Everyone seemed to enjoy the good spirit of the race in Estonia; the typical individual racer thinking only about himself was not to be seen. and in addition, the Tartu maraton had a special vintage invitation, encouraging racers to participate with their oldest cross country skiing equipment to be found. Thus, there were a lot of interesting and intriguing racing suits to observe too. From my experience, the food stations, security personell and so on seemed to be in perfect state.

As I touched upon before, the track itself was very manageable but still always changing with turns and smaller ups- and downhills. There were no long straight flats but also no hard climbs. The total profile of the track is good because you don’t get any last bad (around the bend) surprises; its in general flat, then descending and then just plain onto the finishing line with impressive setup; big screen, food tent, nice, shiny heavy weighing medals to all.

Getting into dry clothes, refilling with food and discussing the experience is also easy in the big tents mounted for the occasion (image left).

My last part of the trip after the Estonian journey, the way back home also went (almost) carefree. The bus was again precise, and everything  was in order at the airport; I faced no problems. The only problem I had was a grumpy bus driver that allowed for around 8 seconds to get off the bus with skis, poles, baggage – the lot. As I thus was too slow for his preference he just closed the door and went off to the nest station; resulting in me having to go to his driving seat and firmly telling him to let me off. This again, resulted in me having to walk a kilometer or so back to the airport with the above mentioned equipment on my back… Why this unfortunate? I don’t know – maybe I had passed him in the race :D?

To finalize, I think the Tartu maraton is a maraton you should go for. The travel there, the city (Tartu), the people and the whole event was to me as an amateur skier a pleasure, although the course itself is maybe not the hardest in the marathon calendar. You will guaranteed remember it with a smile. 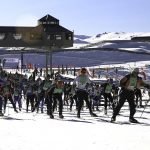